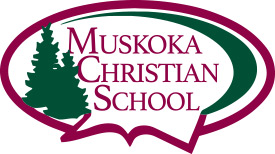 Muskoka Christian School was established in 1978 by a group of concerned parents who were convinced that the Christian lifestyle is best learned in an environment where teaching and learning are based on the Word of God. It opened in a private home in Bracebridge, with 23 students divided into two classrooms - grade 1 to 4 and grades 5-8. By the following summer it was apparent that a better facility was needed. There was a lot of interest being shown by Huntsville families to join the school and it was decided to plan a building somewhere between the two towns. The land finally chosen was the site of the Utterson's town school almost a century earlier. The school building was still standing but was too far-gone to save. So with a valiant effort by all concerned our second year commenced in our own new building. In 1992, two spacious classrooms and lovely library were added to the facilities.

In the year 2018, we celebrated our 40th anniversary! We are deeply thankful to God for his guidance and provision over these past 40 plus years.